Kumortuli is one of those places that has evolved over the years into a heritage spot for photographers as it houses the makers of the idols that adorn the alters of grand pandals during Durga Puja. It has become a hub for various artists like photographers, models, singers, etc to showcase their skills alongside of those working on the idols. It truly is a delight to the eyes, soul, mind as you witness the process of making of Durga Maa figurines from scratch. Idol making starts roughly a month before the festivities begin in Kolkata and the makers get contracts from clients as to how they want their idols to be, according to which the start their respective jobs. Durga Puja is coming, there’s a hype in markets and so it is at Kumortuli so we decided to explore it. We’ve never been to Kumortuli during this time of the year and being present in the vicinity of such great artists who sculpt these exquisite idols from clay, mud, straw, sticks, etc. made us stare into each of their workshops in awe.

We boarded the Park Street Metro at around 11am and reached Sovabazar Sutanuti Metro within 10 minutes. In order to go to Kumortuli you need to exit from Gate 3 after which you may take assistance from Google Maps which is pretty accurate and will lead you to your destination within 10 minutes by foot. The alley is dotted with the aforementioned workshops along with other pujo related items. Our entire photo shoot took not more than 45 minutes where we took videos using our Nikon D3500, lens 18-55mm. We also took stills and short videos for Instagram (@gomescraig) using our iPhone XR and Samsung M51. Do let us know your thoughts in the comments below, like and subscribe if you liked our work and do advise if we missed out on something or if something needs to be improved upon. Toodles! ✌🏻

Enjoy some photographs from our tour!

I'm a programmer and designer, I love travelling and eating good food. I write blogs on my experiences and publish vlogs on Kolkata. I'm the CEO & Founder of Pixelvise.

Subscribe to my blog updates to receive notifications about new posts and vlogs.

Covering the carnival-like atmosphere in Park Street as the city celebrates and welcomes in the New Year 2021.
View Post 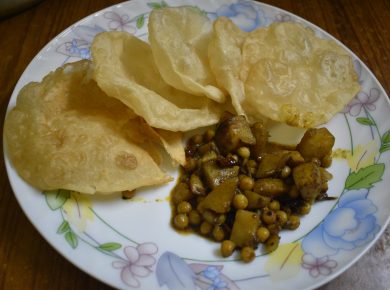 US confirms it has shot down a Chinese balloon in American airspace which it says was being used for surveillance https://bbc.in/3HwBIsh

I wish there was a way to know you're in the good old days before you've actually left them.